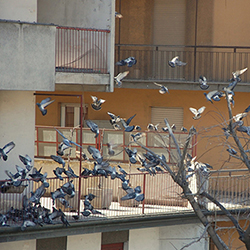 Recent news has announced that even Milan, following Venice and Lucca, has declared "war" on pigeons. In fact, hefty fines await anyone caught feeding them. In addition, citizens are also invited to sanitize the premises and crevices, close ventilation openings and install deterrents to prevent birds from perching on terraces, windowsills and courtyards.
"The pigeon is the urban pest animal par excellence," explains Fabrizio Preliasco, virologist of the Department of Public Health, microbiology and virology of the University of Milan. "Not only because it soils and begrimes historical monuments, but above all, because it is a possible vector for infectious and parasitic disease transmission.”

It therefore poses a sanitation issue that should not be underestimated.
There are about 60 diseases commonly transmitted through contact with pigeons including: 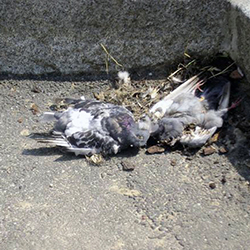 In addition, pigeons, are also vectors for parasite transmission. In particular, pigeons are known to carry the European pigeon tick (a soft tick - Argas reflexus), bedbugs, fleas, and mites, which often cause building infestations where these birds nest, especially inside the attics and roof spaces. Additionally, there is also a sanitation issue in this case, because these parasites themselves are potential carriers of infectious diseases and potential parasites for humans.

“The transmission of infectious diseases or parasites from birds to humans or animals occurs through contact with the pigeon, its feathers, or its excrement," continues Pregliasco. "After contact it is easy, in fact, for the hand to touch the mouth, and the disease will begin to spread from that point onward."
However, diseases are not always transmitted by direct contact. In fact, in the case of excrement, once dry, the infected dust particles are carried through the air by the wind, fans, and vacuum cleaner emissions. The infected particles are then carried into schools, restaurants, apartments and any place where they can contaminate kitchen utensils or linens, and consequently triggering the infectious process. This last case, however, can occur in the presence of pigeon colonies, whilst the probability decreases in the presence of a single bird.

On the other hand, everything is silent on the avian flu front. Lengthy discussions have been held about the fact that pigeons could transmit this disease. "So far there have been no documented cases of infection with H5N1 (the avian influenza virus) in these birds," explains Pregliasco. "In fact, these birds were found to be less susceptible to the disease." Pregliasco continues, "The fact remains, that the presence of massive flocks and large colonies of pigeons in urban areas can be a potential vehicle for the aforementioned infectious diseases and remain a danger to public health.”

Therefore, it is better to avoid touching them, stay away from their excrement, and not collect their feathers. If contact must be made, it is advised to properly protect yourself with disposable latex gloves and thoroughly wash your hands with antibacterial soap if you inadvertently come into direct contact. Finally, in order to carry out adequate disinfestation of their preferred nesting places such as attics or roof spaces, it is best to rely on specialised companies that are able to establish effective interventions for pigeon removal and deterrence.

We use cookies on our website. Some of them are essential for the operation of the site, while others help us to improve this site and the user experience (tracking cookies). You can decide for yourself whether you want to allow cookies or not. Please note that if you reject them, you may not be able to use all the functionalities of the site.